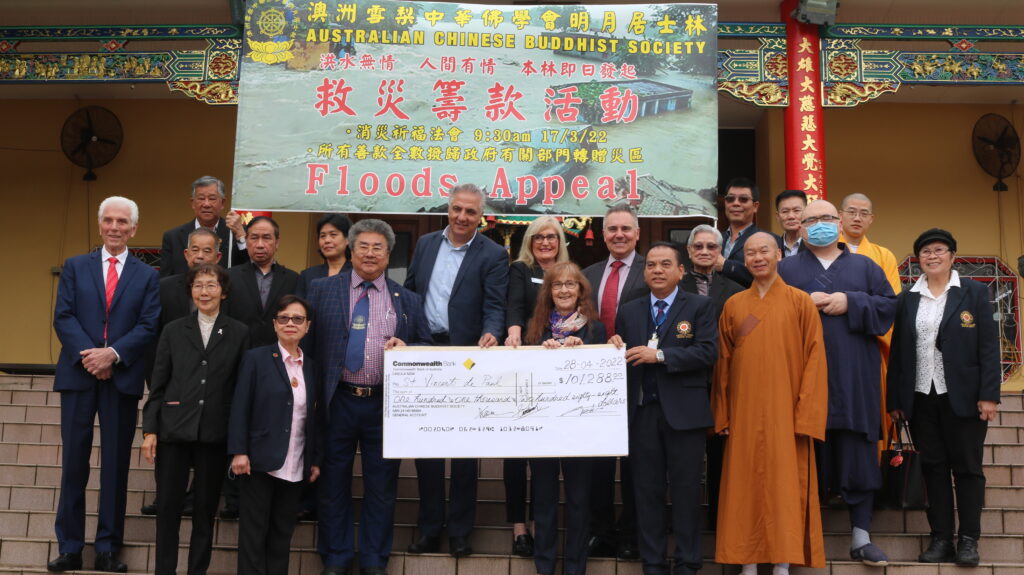 LAST month, I made a flying visit to two Buddhist temples in Sydney to connect three wonderful communities who wished to generously donate to the flood recovery effort which is under way for Lismore and the Northern Rivers region.

Members and devotees of the Society started the appeal as soon as the flooding occurred in Lismore and when the temple advertised in the Chinese Newspaper for more donations, the response was overwhelming.

A fundraising concert carnival at the temple on April 17 raised over $10,000 alone. Further, the Society transferred charity income for the last three months from the temple and directors decided to add extra funds, enhancing Vinnies’ ability to purchase charity items to help individuals and families affected by the floods.

Master Venerable Shi Ming Shang gave a dharma talk, saying everyone at the temple chanted and prayed for the well-being of people in Lismore, and wished with the Buddha’s blessing there will be no human or natural disasters, no wars, we shall then have a more peaceful and happier world to live in.

In another lovely donation, The Australian Cambodian Chinese Association Incorporated’s President Shao Jian Guan presented Ms Van Doorn with a cheque for $6,150, funds raised by the social club based in Canley Vale.

That afternoon, I travelled further west to the Fu Guang Shan Nan Tien Temple in Parramatta for a third cheque presentation.

Chapter President Andy Chin said more than 1000 devotees from the Wollongong head office and three Sydney branches had been deeply moved by the scenes of utter devastation in Lismore.

“We choose a different fundraising cause every year, and thought we must show compassion to our brothers and sisters in Lismore,” Andy said.

“We were honoured to do this and to host Janelle when we knew she was coming down to Sydney.”

Students at the Australian International School in Singapore are keeping me posted on their Week 2 Term 2 fundraiser, Bring Anything But A Backpack, with donations to help restore the Lismore Library’s books lost during the flood.

On WhatsApp, I had a video call with the Deputy Head of Secondary and two senior students – Millie (Lismore born and daughter of Karla Lismore born) and Oli – to hear of their wonderful student-led initiative for Lismore’s library users.

At Parliament House, I had a good meeting with Lismore’s Roy Starkey, who is a member of the Ministerial Advisory Council Ageing NSW (MACA), to discuss the need for seniors affordable housing, especially for women aged over 50, made that much greater since the February 28 flood event.

Roy provided me with a broad-ranging report, Experiences From The Field and Options for Recovery, which I have shared with David Witherdin, the newly-appointed Chief Executive of the Northern Rivers Reconstruction Corporation.