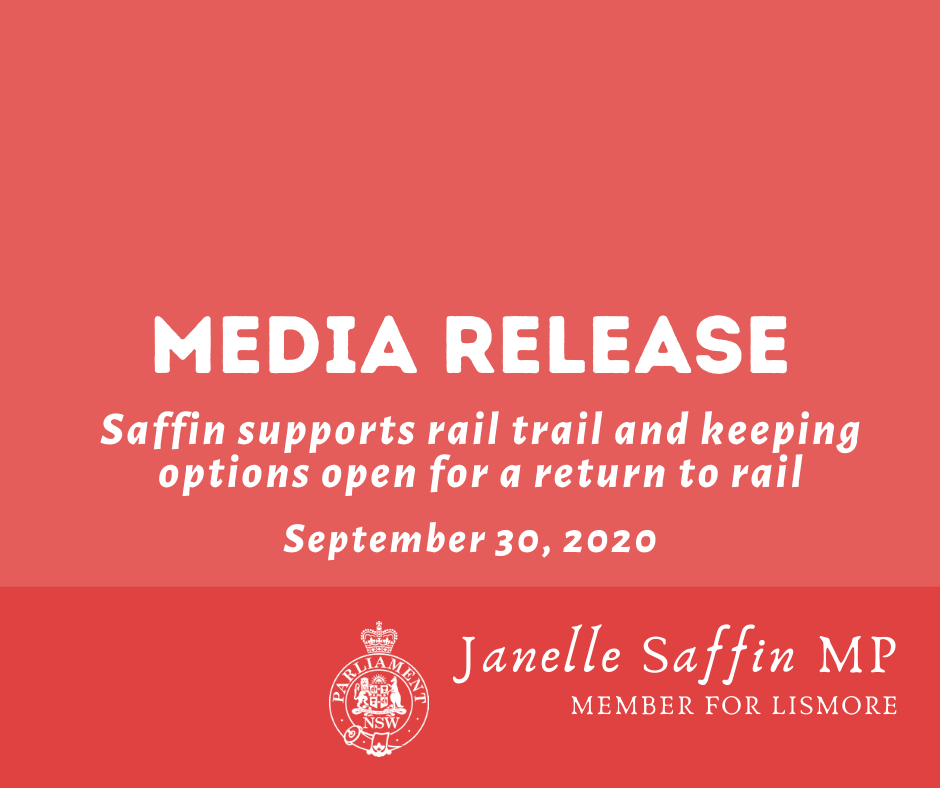 Ms Saffin said she had never shied away from this dual position and it was a shame that some commentary on the Transport Administration Amendment (Closures of Railway Lines in Northern Rivers) Bill 2020 was causing division across the community.

“My focus in Parliament last week was on ensuring that the Bill maintained the rail corridor in public hands, able to be brought back to train use without obstacles,” Ms Saffin said.

“I negotiated two amendments with NSW Minister for Regional Transport and Roads Paul Toole (who introduced the Bill) that strengthened this so I find it perplexing that some people feel the need to attack me and plan to protest outside my office.

“These amendments passed in the Legislative Assembly. The view I had heard many express was that the one-page Bill contained nothing unexpected.

“The Bill is now with the Legislative Council which in October will review and debate it in detail.”

Ms Saffin said that when she was Federal Member for Page, rail trail advocates came to her, and even though it was a State issue, she told them that sounded fine but the rail corridor must remain in public ownership no matter what.

The then Page MP ran a community petition which achieved this goal and while Ms Saffin could not promise to bring back the train, she helped secure funding for a Regional Integrated Transport Plan which included rail transport as an option for the Northern Rivers and the Mid North Coast.

Ms Saffin said she went to the 2019 State election on the public record as supporting the rail trail so this was ‘no big secret’ and she had clearly restated her long-standing commitment to ensuring the rail corridor was protected.

While a few Greens Party members are predicting Ms Saffin will lose the next State election in 2023 because of her support for the Rail Trail Bill, Ms Saffin said this sounded more like political posturing.

“New South Wales has a preferential voting system. Yes, The Greens and Labor exchange preferences but I am not a Green; I shape and make Labor policy based on Labor values of fairness and equity,” Ms Saffin said.

“I meet with and listen to all sides and try my hardest to do what is best for our region.”