Saffin pushes for immediate and strategic support of regional economy 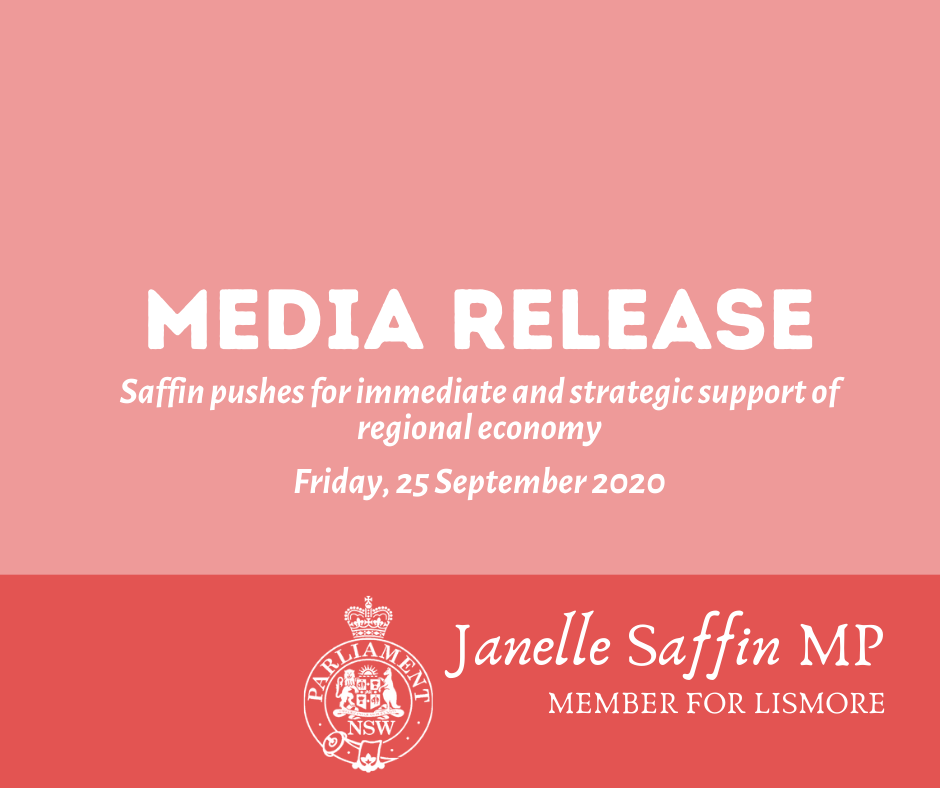 LISMORE MP Janelle Saffin is calling on the Berejeklian-Barilaro Government to deliver urgent financial support to businesses on the Northern Rivers and Northern Tablelands and to strategically establish a Special Activation Precinct to turbo charge the regional economy.

It will help our region climb out of COVID. We have projects ready, the collaboration and the will, but we need our share of New South Wales’ available resources, including the $1.75 billion owed to regional and rural NSW from Restart NSW, Ms Saffin said.

Ms Saffin has used a series of Notices of Motion to NSW Parliament to focus the Government’s attention on the Electorate of Lismore, still recovering from 2017’s major flood, drought, last year’s bushfires, this year’s COVID-19 lockdown and the Queensland-NSW border closure.

Ms Saffin said that while she had successfully lobbied for the Border Bubble to include the Lismore City, Byron Shire, Ballina Shire, Richmond Valley and Glen Innes Local Government Areas, many businesses were still hurting economically.

“NSW Business Northern Rivers estimates that businesses have been losing an average of $10,500 a week in revenue so there is still an urgent need for the Government to come good with a rescue package like the $45-million one it offered to NSW businesses near the Victorian border,” Ms Saffin said.

“I thought it was important for me to advocate for our region through a combination of Notices of Motion, Questions on Notice to Ministers and direct reps to Ministers, and at next week’s meeting with Regional Development Australia-Northern Rivers, we can flesh this out in more detail.

“Having a Special Activation Precinct here on the Northern Rivers, and all of the extra government support that comes with these precincts, would give real teeth to my earlier calls for a Regional Jobs Plan.

“Another major issue is that the NSW Government has introduced a Whole of Government Procurement Policy for collecting waste from Health, TAFE and caravan parks on Crown reserves, squeezing out our local regional companies in favour of the big multinationals, and killing off local jobs.”

1. Notes the Regional Development Australia’s Remplan Report estimates 15,471 jobs have vanished from the Northern Rivers regional economy between February and May 2020, with accommodation/hospitality and retail sectors hardest hit.

2. Recognises the need to expand the network of Special to the Northern Rivers region, home to many cutting-edge entrepreneurs in its stated range of industries, including freight and logistics, defence, advanced manufacturing, renewable energy and tourism.

1. Notes the Government moved quickly to provide a $45-million rescue package for New South Wales small businesses adversely impacted by its decision to close the NSW-Victorian border to prevent the spread of COVID-19.

2. Notes there is an urgent need for the Government to extend a similarly generous grant program to all local small businesses in Northern NSW, which, having endured drought and bushfires, are now really struggling to cope with the Queensland-NSW border closure.

1. Notes the Government has failed to deliver the legislated commitment to allocate 30 per cent of Restart NSW funds to regional and rural New South Wales in any year since its inception, delivering only 18.9 per cent of $3 billion instead of $4.75 billion from 2012 to 2019.

2. Calls upon the Premier and the Deputy Premier to deliver the promises Restart NSW funding of 30 per cent each year and to pay the debt of $1.75 billion owing to the people of regional and rural New South Wales.

On Procurement Policies, Ms Saffin moved that the Lower House:

2. Recognises the need for an urgent review of these procurement policies and consultation with small and medium size regional companies to ensure that they still have a seat at the tendering table and are not disenfranchised to the point that their revenue streams can be reduced by a third, leading to job losses in Northern NSW during an economic recession.