“WE ARE CAUGHT BETWEEN TWO STATE BUBBLES.” – STATEMENT BY JANELLE SAFFIN MP 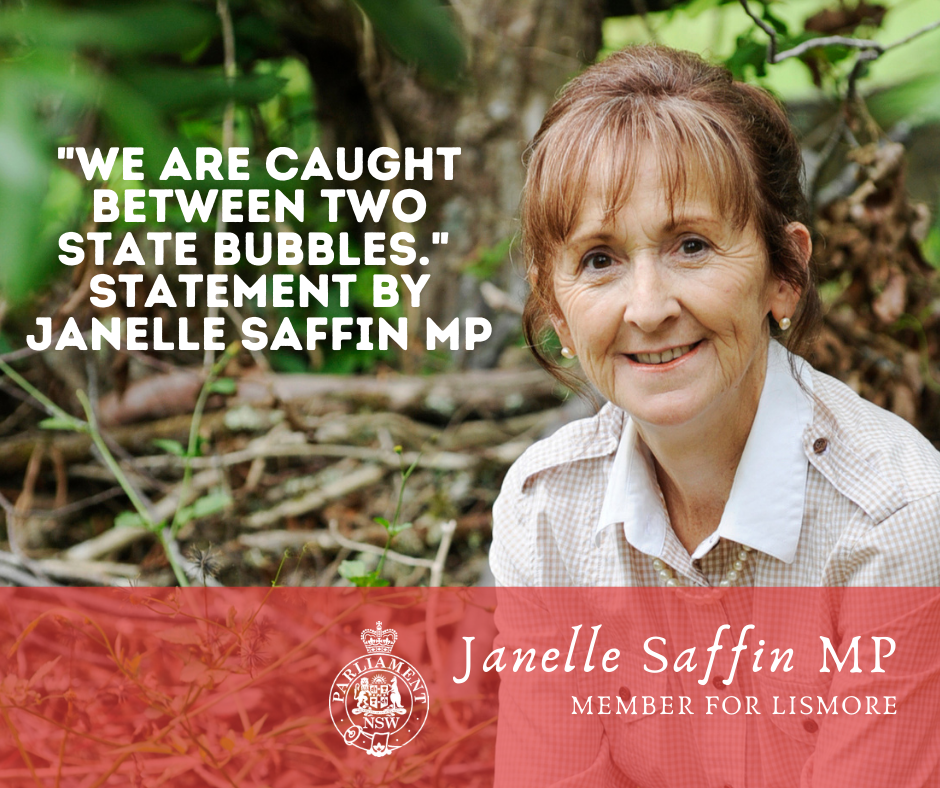 “Our problem, both here in large parts of the Northern Rivers, is that we are outside two ‘Bubbles’ – the ‘Queensland Bubble’, where our region desperately needs access for our industries and for the health and well-being of our people – and, just as importantly, we are outside the NSW ‘Sydney Bubble’ where the needs of our capital city are overwhelmingly occupying most of the attention,” Ms Saffin said in a major statement.

“We are not in Sydney but on the borderland and have become the victims of the cross-border lock-out which is impacting heavily, and in many cases heartbreakingly, on the lives of our people.

“We do not see ourselves by any definition as a COVID-19 ‘hotspot’.

“We do not see ourselves as a threat to the safety of Queensland.

“My grandson, daughter-in-law, mother, sisters and family members live in Queensland. They all love their Premier’s lockdown. Yet my Mum, who lives in Ipswich and uses the Ipswich Hospital, is more at risk there than from me.

“But we have seen that neither the Prime Minister nor the NSW Premier has been able to change the minds of the States and their border lockdowns.

“And their political attacks have not changed a thing. If the attacks could, I would unleash too.

“We are well aware of the size of our region’s needs and the problems which the border closure has caused to our families, communities, industry and jobs.

“And it is ongoing. We are not out of the woods yet.

“Shy of the Queensland Government reopening the border, and the NSW Government moving the border checkpoint south, both options dismissed by the respective Premiers, it would be helpful if the border bubble could be expanded to include the entire State electorates of Lismore, Ballina and Clarence, where there are no active cases of COVID-19 and where the communities mostly trek north to the Sunshine State.

“A larger border bubble is one option which we could ask Queensland to consider and on behalf of our community, I have asked our NSW Government to advocate for this.  I have also sent the same advocacy representation to the QLD Government.

“I will continue to seek to bend the current border closure restrictions to soften the impact on lives and livelihoods across the Lismore Electorate and Northern NSW.

“I have sought each and every day to help lessen that impact since the strict QLD border restrictions were imposed on us.

“We are hurting.  Every day I hear the pain and feel it as my own.  There are too many sad situations.

“Working as your elected representative, I have managed to secure some small but hugely significant wins, including gaining the movement of some of our postcode areas into the ‘Queensland Bubble’, individual exemptions, health workers able to cross over, TAFE students covered, and the establishment of the Cross-Border Health Unit.

“But much, much more is required.

“And this is a lesson our region should never forget: that we historically have played second fiddle in NSW priorities unless our needs happen to reflect those of the ‘Sydney Bubble’.

“This is a reality. Our inclusion in each ‘Bubble’ is not in our hands, no matter how we shout and stamp our feet.

“However, Mr Barilaro has not yet brought together State MPs in the north of the State along the Queensland border to talk with us about what our constituents are telling us they desperately need.

“He should also listen to the pleas of the local councils through their Joint Organisation in this region.

“I have now received the position paper of the Northern Rivers Joint Organisation on which Tenterfield Shire Council has an observer’s spot.

“I suggest Mr Barilaro could start with announcing the same support package for our border communities that he did in the south of the State on the Victorian border.

“Because our industries and businesses in Northern NSW, like those on the Victorian border, are also crying out for help.

“That package was worth $45 million, and when I asked him for the same for us in the north, I was told that it was Queensland’s fault, which I interpreted as that we are in danger of being abandoned yet again on this issue.

“The fault is not the issue here but the fixing is, and that is for the NSW Government to act on.

“The Regional Chamber of Commerce and the Northern Rivers Joint Organisation of Councils have also now asked for the same help.”

“I ask Mr Barilaro, as our State’s negotiator, to help.

“I continue to listen to everybody at local level and I make sure that all my representations also go directly through to the respective New South Wales and Queensland ministers,  seeking their assistance, and where appropriate, our Cross-Border Commissioner, James McTavish.

“My list for lobbying both the Queensland and the New South Wales Governments is extensive:

and we from New South Wales:

“While we are hopeful that the virus will be beaten, we may still have a long way to travel.

“That is why our voice must be heard and action taken.”